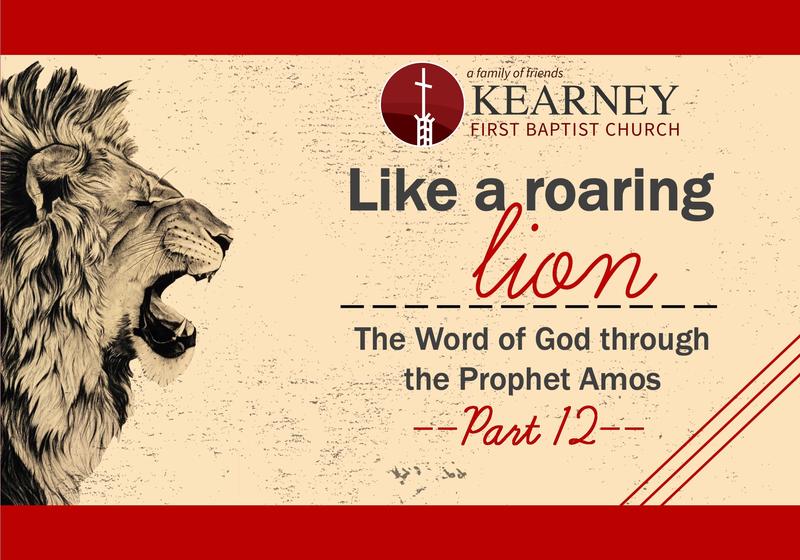 Like a Roaring Lion – Part 12 Amos 8:11-14   Detour – A day of reckoning is coming (8:11).   “It is a fearful thing to fall into the hands of the living God” (Hebrews 10:13). There are at least three biblical references to this concept. Isaiah 63:2-3, Joel 3:12-13, Revelation 14:17-20.   “Then another angel came out of the temple in heaven, and he too had a sharp sickle. And another angel came out from the altar, the angel who has authority over the fire, and he called with a loud voice to the one who had the sharp sickle, ‘Put in your sickle and gather the clusters from the vine of the earth, for its grapes are ripe.’ So the angel swung his sickle across the earth and gathered the grape harvest of the earth and threw it into the great winepress of the wrath of God. And the winepress was trodden outside the city, and blood flowed from the winepress, as high as a horse’s bridle, for 1,600 stadia” [which would be about 184 miles]. (Revelation 14:17-20). In 1 John 2:2, the apostle John says of Jesus that “He is the propitiation for our sins, and not for ours only but also for the sins of the whole world.” The word propitiation (hil as mos) means, “a sacrifice that bears God’s wrath and turns it to favor.” “Behold, the days are coming. . .”  A day of reckoning is coming.   1) The Word of God must always be primary to the people of God (8:11-12).   If the Word of God would no longer be available, how much difference would that actually make? According to LifeWay’s Facts and Trends, a July 2, 2019 article states the following:  32% of Americans who attend Protestant church worship regularly say they read the Bible personally every day. 27% say they read the Bible a few times a week. 12% say they read the Bible once a week. 11% say they read the Bible a few times a month. 5% say they read the Bible once a month. 12% say they rarely or never read the Bible. The verb wander is used as a description of the way a drunken man walks. It is used to describe the swaying of trees in the wind, of lips quivering in agitation. Psalm 139:13-16 – “For you formed my inward parts; you knitted me together in my mother’s womb. I praise you, for I am fearfully and wonderfully made. Wonderful are your works; my soul knows it very well. My frame was not hidden from you, when I was being made in secret, intricately woven in the depths of the earth. Your eyes saw my unformed substance; in your book were written, every one of them, the days that were formed for me, when as yet there was none of them.” 1 Corinthians 6:9-10 – “Or do you not know that the unrighteous will not inherit the kingdom of God? Do not be deceived, neither the sexually immoral, nor idolaters, nor adulterers, nor men who practice homosexuality, nor thieves, nor the greedy, nor drunkards, nor revilers, nor swindlers will inherit the kingdom of God.” Genesis 1:27 – “So God created man in his own image, in the image of God he created him; male and female he created them.” Rejecting the prophetic word (2:12; 7:12-13) will result in God withdrawing that word. The Word of God must always be primary to the people of God.   2) The Word of God will never pass away but the opportunity for people to hear it and heed it will (8:13-14).   “The very readiness for something new which is proper to their youth makes them fair game for the religious quacks and isms, fads and fancies.” –J. A. Motyer “The errors of one generation have become the dogmas of the next, the truth is one step further out of sight and the new generation one step further from reality.” –J. A. Motyer Corruption occurs by bending the truth, blending the truth, and breaking (fragmenting) the truth. You’re making a decision today, too. Are you moving closer to Jesus or drifting further from him?